Tippmann A5 Paintball Gun Review – Why This Gun Is Very Accurate?

If you are looking for a valuable deal on a high-end paintball gun, the Tippmann A5 model might be the perfect option for your needs. With so many integrated features, it truly stands out among its competitors in a more creative way that you have imagined.

Once you identify all the key points, you will be able to figure out whether the deal is worthwhile helping you in making an informed decision.

Key Features of Tippmann A5

Tippmann is highly reputed for producing durable products. Similar to other Tippmann markers, Tippmann A5 has a high-quality built that can last for several years. This paintball marker is constructed from a solid metal frame and superior-quality plastic.

Don’t worry even if you drop them from a height or throw them off a car, they will still work perfectly. The durability is one of the key points why Tippmann A5 is preferred on the paintball field. It comes with an optimum weight of 1.41 lbs. 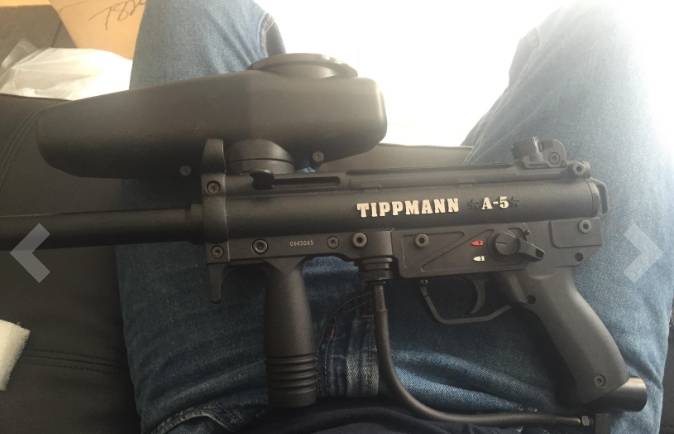 Neither it feels very heavy nor too light which in my opinion is one of the best features. Further, the texture on the gun will give you a feel of holding a real gun and that makes it even more exciting.

One of the major highlights and unique features of the Tippmann A5 paintball gun that makes it stand out among the competitors is the revolutionary Cyclone Feed System. This cutting-edge feed mechanism can absolutely connect the air system to the feeder sprocket.

That way, it can provide a significant amount of power essential to release a plethora of paintballs as quick as you pull the trigger to fire them. You don’t have to worry about being stuck with a paintball marker that simply doesn’t keep up with your standards when we talk about trigger release and ball output. The A5 model is exclusively designed to impress you with its superior performance on the battlefield.

We just cannot forget about mentioning another impressive feature of the Tippmann A5 paintball marker. You can easily disassemble and reassemble the gun within seconds. If you ever had an experience with a high-end paintball gun, you will probably have an idea about the challenges associated with this process.

The average paintball markers can take several minutes to assemble and disassemble even for proficient players. When Tippmann A5 was developed, one of its important features was to disassemble and reassemble within a minute or two.

What’s more interesting? You can get the job done without even using any other tools. You can even do this when struck in the heat of battle.

How it feels in your hands is one of the important considerations to figure out whether Tippmann A5 is the right option for you. Many users have claimed that this paintball gun is comfortable in their grip.

The marker is exclusively designed to be easily used which is simply great for all those who have started learning the paintballing sports.

The better front grip makes it easier to hold and enjoy enhanced precision when you shoot. Further, the gun features a long barrel designed to assist you in firing accurate shots. A5 is a semiautomatic model and therefore you can expect a complete round of balls quickly.

The hopper is capable of holding approximately 200 rounds at once to help you keep playing for several hours. The paintball marker can shoot up to 150 feet which is simply exceptional.

Tippmann A5 paintball gun is certainly one of the most powerful options on the market. It features a cyclone feed mechanism designed to connect the feeder to the air system. It gives you an edge to fire shots quickly with only the trigger.

The system shoots about 15 balls per second without even using batteries. As the paintball marker has such a powerful shot, it is perfectly fitted with a shock-absorbing cap that makes sure the recoil of the gun is reduced with every shot. 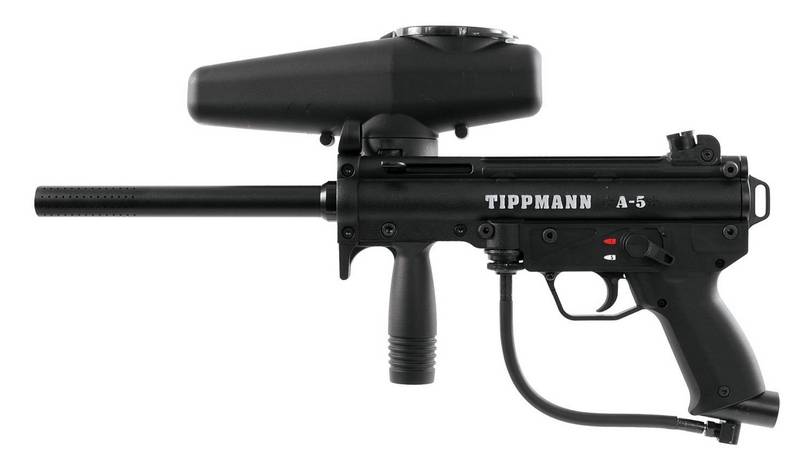 Shooting With Tippmann A5

As we have already mentioned, the model has semi-automatic actions and shoots approximately 13-15 paintballs per second. Though it primarily depends on the player’s capability to press the trigger. If you are looking for advanced performance, you would simply love to add E-grip and response trigger to the A5. Several paintball players use E-trigger to let you have a single shot or fully auto firing modes. Tippmann A5 features a standard 8.5-inch barrel giving you a great ability to shoot up to 150ft. Some players want to increase the shooting range. For this purpose, you can purchase an Apex 14″ extended barrel which offers a significant increase in range and accuracy.

By using this model, you will hardly find any paint breaks into the gun. Also, you don’t have to worry about the gun’s cleanliness and maintenance. It can be field stripped in just 1.5 minutes without using any external tools.

Even if this paintball gun is not used for a long time, still you don’t have to clean and maintain it regularly. It would work fine. Unfortunately, if any part of the gun is broken, you don’t need to be concerned since this marker has several replaceable parts easily available on the market. Overall, cleaning and maintaining Tippmann A5 is quite an easy job.

As soon as the Tippmann A5 paintball gun is released, its speed and high-performance are renowned among both novices and professional paintball players. You will find many top-notch components that you must consider. If you are already impressed by the notable speed of this premium-quality paintball gun, there is a lot to see yet.

The added features on this paintball gun make it a great performer. The package comes with the 15-inch barrel for more precise shooting. Further, it features a red dot sight for accurate shooting. The box also includes the barrel, the cyclone feeds, safety bag, and barrel lube. Further, it has a sling mount to allow players to comfortably carry it and provide enhanced stability in addition to super-accuracy. Featuring an external selector switch E-grip, the A-5 model has a magnetically initiated Hall Effect sensor with 3 separate positions that let users adjust speeds on the fly. On top of this, the new E-grip features 5 firing styles.

Overall, the Tippmann A5 is a perfect option for beginners and intermediate players. It has a 2-year warranty so you can have peace of mind.

If you are looking forward to investing a considerable amount of money on a paintball marker, you will find an extensive range of options available both online and in local stores to meet your needs and expectations.

If you want a paintball gun that offers a premium level of quality performance and has proven capacity of providing optimal performance over the years, this can be your best bet for your hard-earned money. Don’t forget to check it out and try yourself. Let’s make paintballing even more fun and exciting!